On Saturday 29 June Canazei and Val di Fassa, at their EWS debut, will play host to the fourth Round of the 2019 season. Map course released today.

After a sensational winter season, on 29 June Val di Fassa is going to celebrate the beginning of an equally extraordinary summer season with a major event, the MET Enduro World Series Val di Fassa. In an electric atmosphere – as only a world series event can create – Canazei and the whole Val di Fassa, venues nestled among the beautiful peaks of the Unesco-listed Dolomites at their debut in EWS, are getting ready to welcome hundreds of riders and enthusiasts. A highly anticipated race, sold out just a few hours after registration went live, fourth Round of the season (a total of 8 Rounds around the world: New Zealand, Tasmania, Portugal, Italy, France, Canada, California and Switzerland), halfway event of the Series that promises to offer great battles and an incredible spectacle.

400 athletes from 18 different countries will compete on a completely new race course that was revealed today Monday 24 June and will first open for Practice on Thursday 27 June. For this reason, Thursday and Friday’s Open Practice will be decisive: it will offer the best chance for trying the new trails, built thanks to the hard work of the Fassabike crew. They have created this new race course specifically for the EWS event, keeping in mind the importance of protecting a territory that is a UNESCO world heritage site.
The race course is made up by 5 special stages for a total length of 41km and 3.000m of descending. The Transfer Stages will be partially uplifted – three different lifts are going to be used – and partially pedalled. Two of the three lifts – Pradel gondola and Ciampac – will be open to bikes for the first time: this change by itself suggests that this year’s race course is going to be very different from the previous editions.

Belgium’s Martin Maes (GT Factory Racing) and France’s Isabeau Courdurier (Intense Mavic Collective) lead the Series, in the Men and Women respectively. At the moment both riders are in superb form: that’s why they have totally dominated the season until now, winning each and every one of the three Rounds that have taken place. They will surely make it to Italy determined – more than ever – to repeat a similar performance, confirming their leadership over the Series.
The result, however, will be far from obvious. This race, beside being a new entry for the Series, is the first proper mountain race of the season: an alpine competition, with serious changes in elevation and trails that run through a variety of conditions and terrain. Some transfer stages will be tackled with the help of mechanical uplifts – another first-timer for the 2019 season – that will make easier to reach high altitudes and make the descents even longer and more exciting.

Fausto Lorenz, chairman of Val di Fassa Tourism Board, declares: «The Enduro World Series constitutes a prestigious opportunity to showcase Val di Fassa to a wide audience of enthusiasts, together with the significant growth in the bike offer that the Valley has achieved in recent years. The EWS debut is a major milestone, both for the Valley as a whole and for the Fassa Bike team: they have been working hard to prepare this event and the routes that make Val di Fassa a bike destination of growing appeal. Putting on a contest aimed at the best riders in the world is for us, undoubtedly, a source of pride: on this occasion, the participants are also going to be witnesses to the quality of the hospitality intended for an audience that is in constant growth and that, therefore, bears considerable interest».

For the general public, MET EWS Val di Fassa will mean even more than competition. The centre of Canazei, Via Roma, will come alive and full of colours with the set-up of paddock area and event village, as early as Friday morning. Within the town centre supporters and enthusiasts will be able to browse around the stands of the main sponsors – leading brands such as MET – and meet their favourite riders and the crews at work. In addition, at MET EWS Val di Fassa everyone will be able to experience the event first-hand, riding the same trails that just a few hours earlier the fastest riders in the world have been battling on. How? Thanks to the EWS Bike Days you will be able to purchase a bike pass at the special price of 50 euro (available at the lifts’ ticket office). It will be valid on Saturday 29 and Sunday 30 June and it will allow you to reach the trails of the Special Stages and watch the race trackside. On the following day, you will be able to ride the same trails, still tape-marked; take part in guided rides led by the local riders of Fassabike or demo first-hand all sorts of MET products together with the team’s best riders. A truly unique opportunity that will allow you to experience this international mtb enduro event to the full.
Now let’s the great MET Enduro World Series Val di Fassa adventure begin. 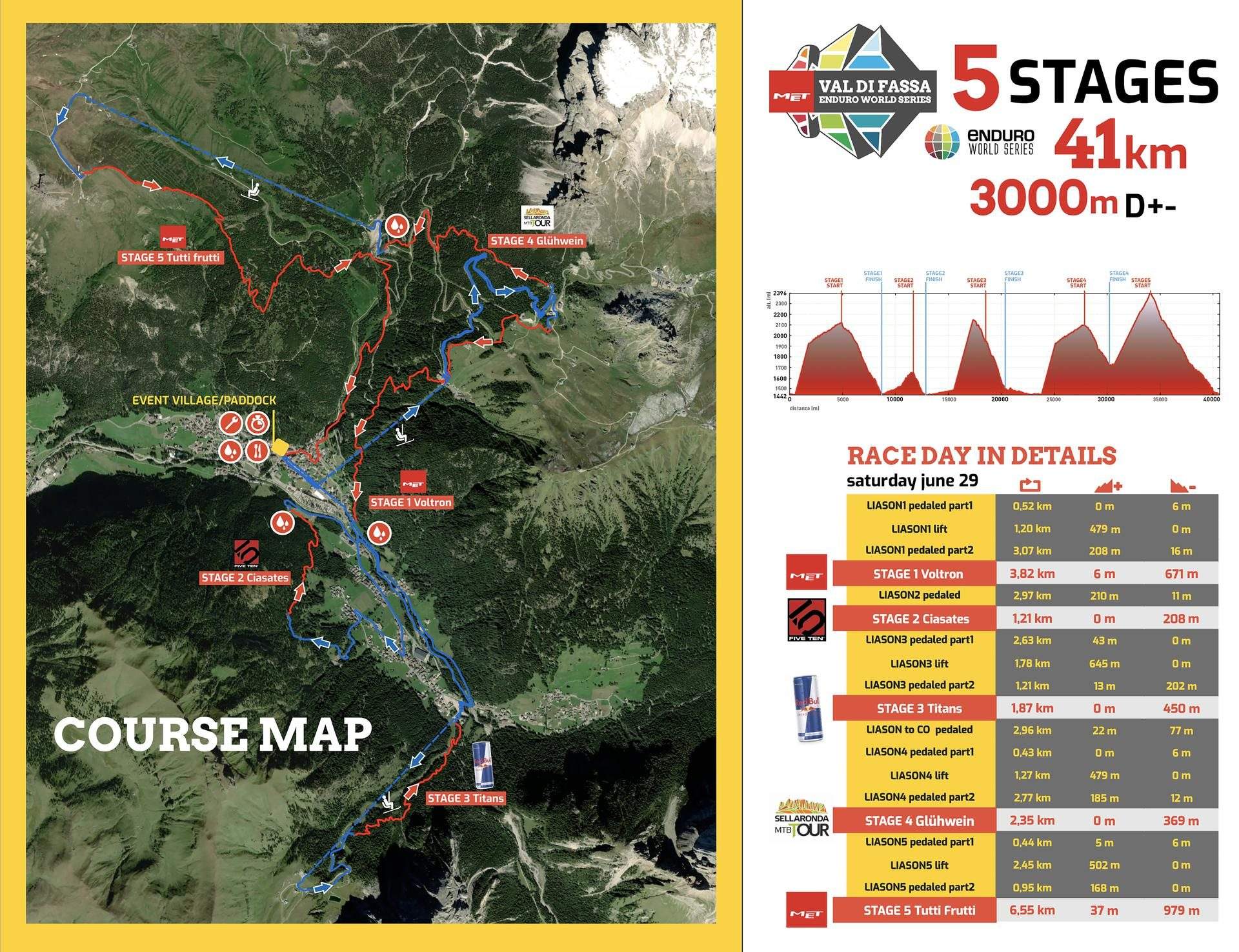